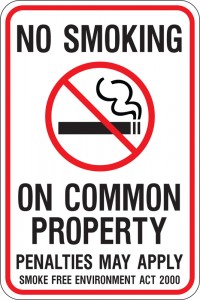 In 1997 the NSW Supreme Court said that an owners corporation can make a by-law prohibiting smoking within the lots and on the common property within a strata building.

Orders can be made against residents who smoke or allow their cigarette smoke to drift into other
units.

In another case in 2006, an owners corporation claimed that secondhand smoke exposure was a nuisance and it applied to the Adjudicator for an order to require the smokers (who were tenants) to stop smoking in their unit, and for the landlord to stop allowing the tenants to smoke in the unit, to prevent the unit from being used in a way that caused a nuisance to other residents.

The Adjudicator agreed that the drifting of second hand smoke from the smokers’ unit into adjacent units constituted a nuisance that he was able to restrain. In the end result, the Adjudicator ordered the tenants to take all necessary action to prevent smoke odour from their cigarettes entering other units and the common property. The Adjudicator also ordered the landlord to stop allowing the unit to be used in a way that created a nuisance for other residents by taking necessary action to prevent smoke odour from his tenants’ cigarettes entering other units or the common property. This case shows that action can be taken to stop second hand smoke drift in a strata building against both landlords and tenants even without an anti-smoking by-law.

A case in 2015, involving the NSW Civil and Administrative Tribunal and a mother in a unit in Potts Point who was concerned about the health impact of a chain smoking neighbour. The Tribunal held that the residential tenancy agreement required the landlord to provide premises which were fit for habitation. The secondhand smoke of the neighbour made her unit not fit for habitation. The Tribunal did not accept the landlord’s argument that his hands were tied and that he could do nothing about the smoke drift problem. The Tribunal said that the landlord could have asked the owners corporation to introduce a by-law prohibiting smoking or made a claim against the chain smoker downstairs to obtain an order to stop her smoking or take action against the owners corporation to undertake repairs to the common property to prevent smoke passing from one unit to another. The outcome of the case was disastrous and costly for the landlord.

In conclusion, if smoking is a problem in a strata building, the owners corporation should make a by-law prohibiting smoking. This type of by-law is simple to prepare and enforce. Orders can be obtained to stop residents smoking and put an end to secondhand smoke drift.