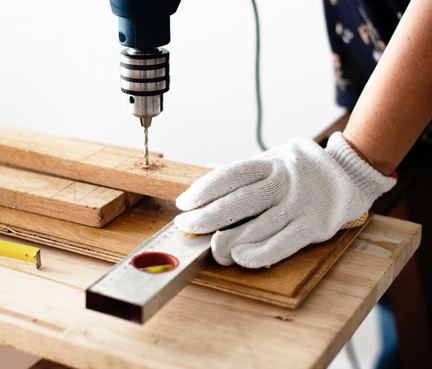 I live in a unit complex in Sydney and there are 76 units. My strata contracted (& paid for) a company to come fix my faulty waterproofing on my balcony. In order to access the faulty waterproofing, the company had to remove/lift the wooden deck on the balcony. During the process of repairing the faulty waterproofing, my wooden decking boards were damaged and the company also poorly relayed the deck with some gaps between boards and no gaps between other boards. The work was carried out in September 2018. And to this date, we’ve had numerous discussions with the Executive Committee (EC) and Strata, and the deck is still not repaired and left in a hazardous state.

Initially, the EC proposed to lift the deck and relay the boards and replace the broken boards. However now, the EC only wish to replace 6 of the broken boards, with cheap carpentry boards (not even decking boards), in a staggered pattern. My original deck had full length boards.

Then I went to the strata office and did an audit of the expenses of the complex from 2011-2018 and discovered that the EC have been using owners funds to pay for works to their own lots. But they don’t wish to pay to fix my deck, which I find unfair and disgraceful.

Also, I’ve found the strata manager to be very difficult and even a bully. I asked her to have the water damaged skirting boards (damaged as a result from faulty waterproofing) fixed and she pretended to not have any knowledge of it. And knowing (from the expenses audit), I asked the strata manager to fix a few other things in my unit, which she has paid to fix for other lots, and she refused making up excuses or pretending not to know she’s already paid for other lots.

Question: What rights do I have to have the Executive Committee fix my deck properly to a standard that I am happy with?

Answer: There is a strata titles case which states that the duty of the Owners Corporation to repair tiles on a balcony, in a context similar to yours, was, either to match new tiles as closely as possible in appearance and value to the existing tiles so as not to detract from the appearance or value of the lot OR in case very similar tiles were not able to be sourced, then the owners corporation would have to retile the whole balcony floor.

Question: What can I do about the Executive Committee who have been opportunistic and misusing owners funds?

Question: What can I do about the bully Strata Manager?

Answer: You can report the strata manager to Strata Community Australia or you could make application to the NCAT for orders that a compulsory agent be appointed in light of the significant breaches by the strata committee (but you bear the onus of proof so you need probative evidence).  If successful, the owners corporation and strata committee would have no rights to make any decisions and the new compulsory agent could be ordered to take steps to properly fix your balcony.